The Most Amazing Bridge in the World

OmgUp! - Bridges are useful as connecting two parts of the road that are cut off because of obstacles. For example, like a deep valley, sea, river, and so on.

Along with the development of the world of tourism, bridges also switch functions as a landmark of a city or country. Many cities are competing to build a bridge that is very beautiful, majestic, and amazing. Here is the most amazing bridge in the world. 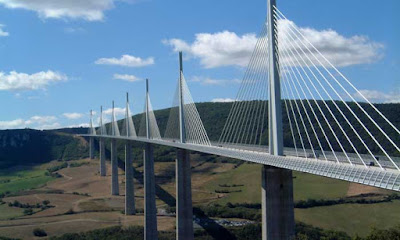 Millau Bridge is the Vehicular bridge road the highest in the world, with cable as its support, which stretches over the valley of the River Tarn near Millau in the south of France.

Towering 1,125 feet above the Tarn Valley in the south of France. Driving a vehicle along the Millau Bridge is said to feel like flying. The Millau Bridge has a total length of 8,071 feet. In short, this bridge is massively impressive both on paper and in real life. The deck is lofted on 7 poles and weighs 36,000 tons. A series of 7 poles, each 292 feet high and weighing 700 tons, are attached to the appropriate mast. 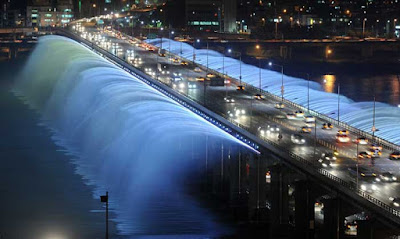 The Moonlight Rainbow Fountain is the longest bridge of the world's fountain which is the record of the Guinness World Record with nearly 10,000 LED nozzles along the sides of 1,140 m in length, shooting out 190 tons of water per minute. Installed in September 2009 at the Banpo Bridge.

Water is pumped directly from the river itself and continues to spin. The bridge has 38 water pumps and 380 nozzles on both sides, which draw 190 tons of water per minute from the river 20 meters below the deck, and can emit 43 meters of water horizontally. 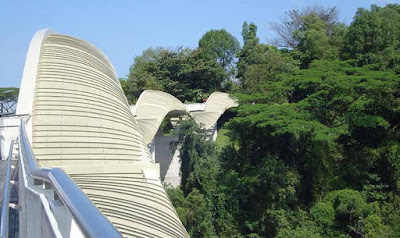 Henderson Waves is a pedestrian bridge that is 274 meters (899 feet) long. This bridge is 36 meters (118 feet) above Henderson Road, it is the highest pedestrian bridge in Singapore. It connects Mount Faber Park and Telok Blangah Hill Park. This was designed by IJP Corporation, London and RSP Architects Planners and Engineers (PTE) Ltd Singapore.

This bridge has a shape consisting of seven curved corrugated steel ribs that alternately rise above and below the deck. The curved part forms functions as a shelter or shelter with chairs. The flaming waveform is equipped with LED lights for the night from 7:00 to 2:00 every day. 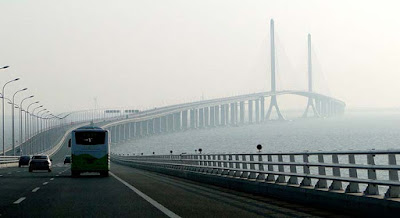 Hangzhou Bay Bridge is a long highway bridge with attached cable parts in support, in Hangzhou Bay on the east coast of China. It connects Jiaxing and Ningbo cities in Zhejiang Province. Its length is 35,673 km (22 miles), Hangzhou Bay Bridge is one of the longest trans-oceanic bridges in the world. Construction of the bridge was completed on June 14, 2007.

The bridge was not opened for public use until May 1, 2008, after a sufficient period of testing and evaluation. The bridge shortens the travel distance between the Ningbo and Shanghai highways from 400 km (249 miles) to 280 km (174 miles) and travel time decreases 4-2.5 hours. 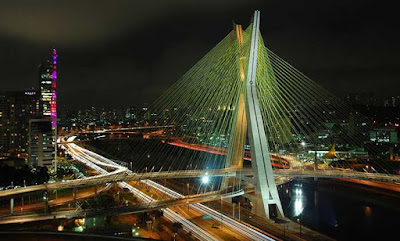 The Oliveira Bridge with attached cables in support in Sao Paulo, Brazil on the Pinheiros River, opened in May 2008. The bridge is 138 meters (453 feet) high and connects to Pinheiros Marginal Jornalista Roberto Marinho Avenue in the southern part of the city.

The bridge deck is unusual because its shape, which is similar to "X", crosses the tower. The "X" width is 76 meters at the base and 35.4 meters in width at the top. This is the only bridge in the world that has two curved lanes supported by a single concrete pole. Two curved tracks, one at 12 meters and the other at 24 meters, have a length of approximately 900 meters. 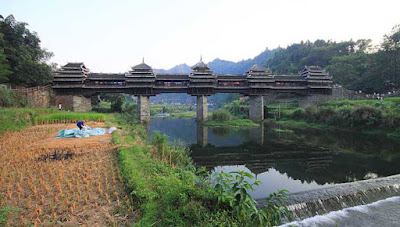 Chengyang Bridge or Chengyang Wind and Rain Bridge is a bridge in Sanjiang County, Liuzhou, Guangxi Province (on the north end of Guangxi), the People's Republic of China. The bridge is in the Dong minority area.

Chengyang is a roof-covered bridge and one of several bridges in Fengyu, the local Dong Minority area. The bridge was completed in 1912. It has many other names including the Yongji Bridge and Panlong Bridge.

The bridge is a combination of bridges, corridors, veranda, and Chinese pavilions. The bridge has a total length of 64.4 meters, and a corridor that has a width of 3.4 meters. The net height above the river is about 10 meters. This bridge is located in Chengyang and serves as a liaison between the two most populated villages. As a result, there is a lot of daily traffic on this bridge.

The Famous, Most Beautiful Tower Bridge from Victoria, England Bridge 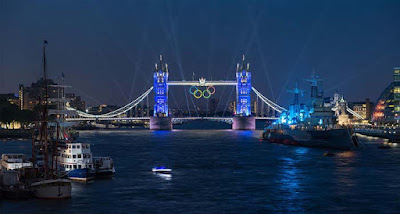 Tower Bridge (built 1886-1894) is a combined bascule and suspension bridge in London, above the River Thames. This bridge is close to the Tower of London, where the bridge is named from there. This has become a symbol of London's icon.

The bridge consists of two towers which are tied at the top level through two horizontal footpaths, which are designed to overcome the horizontal forces provided by suspended parts of the bridge on the land side of the tower. The vertical component of the strength in the suspended part and the vertical reaction of the two paths is carried out by two strong towers.

The bascule pivots and operating machines are placed at the base of each tower. Tower Bridge is sometimes mistakenly referred to as the London Bridge, which is the next bridge upstream. 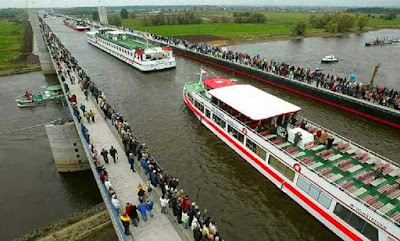 Magdeburg Water Bridge is a bridge of waterways in Germany, opened in October 2003 and part of the intersection of the Magdeburg water channel. It connects the Elbe-Havel Canal to Mittellandkanal, crossing the Elbe River. This bridge is the longest water navigation channel in the world, with a total length of 918 meters (3,012 feet).

The ship moves between two currents making a 12-kilometer (7.5 miles) detour, the Magdeburg Water Bridge connects the East and former West Germany above the Elbe River, and it was made as part of a unification project.

Ponte Vecchio, the oldest and most famous of its kind, Italy 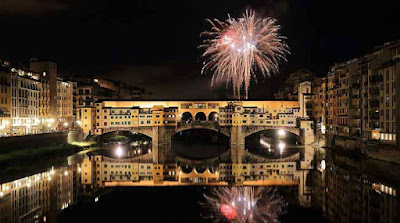 Ponte Vecchio in Florence is one of the most famous tourist attractions in Italy and is considered to be fully built with the oldest, segmental arch bridges in Europe, although there are many partial segments that date back. The bridge was originally built from wood until it was destroyed by floods in 1333, and twelve years later it was rebuilt using stone.

Famous for its layer shop, the bridge has accommodated everyone from Medieval traders and butchers to souvenir stalls and art dealers. The bridge stretches Arno at the narrowest point where he believes that the bridge was first built in Roman times, when through Cassia crossing the river at this time.