Most Amazing Abandoned Places In China

OmgUp! - As in a fairy tale, the village of Houtouwan on Shengshan Island, which is part of the Shengsi islands off the east coast of China, has recently become one of the unusual travel hotspots. In addition to its natural scenery, in this place, you will also see how an abandoned village becomes so amazing when nature has taken over.

Formerly, Houtouwan was once a prosperous fishing village with a population of the 1980s of more than 3,000 people. However, due to its remote location and difficult to access, the residents began to move in the 90s. 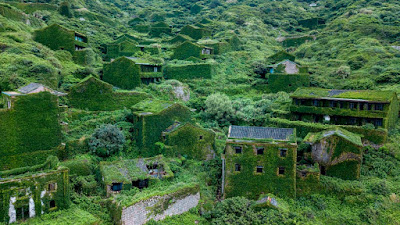 Like a haunted village which is now visited by many tourists

Houtouwan became well-known among Chinese citizens in 2015 when a series of fascinating photographs of the abandoned village went viral.

At present, visitors can easily climb the hilly village because signs and directions have been installed outside the empty houses of Houtouwan village. This, of course, provides comfort for visitors so that the worst thing that might happen due to aging structures can be avoided.

The distance of the Shengsi Islands is about 40 miles from Shanghai. With more than 400 small islands, it's no wonder that these islands are popular tourist sites in Shanghai. Shengshan is also the easternmost island and along with the island of Gouqi is famous for its seafood. This is certainly beneficial for fish farms in China.


How to get there?

The best time to visit this village is during the summer. To get to the village of Houtouwan can not be said to be easy because only the ferry service on the China-Gouji Island route can be used to take us there. Usually, there is only one ferry that departs every day from the Shanghai Shenjiawan dock and the Zhoushan Shenjiamen Banshengdong Dock. The trip takes about three hours and will go down on the island of Gouqi. From Gouqi, you still have to take a taxi to get to Houtouwan.