10 Most Amazing Desert In The World

OmgUp! - Desert is an area that receives quite a bit of rain of less than 250 mm per year. These deserts have very little or no ability for life to exist. About a third of the earth's territory is in the form of a desert.

Many strange and rare events that occur in the desert make this place to be very amazing. Such as the Atacama Desert which is included in the Guinness Book of World Records as the driest place in the world, snow falling in the Taklamakan Desert, Lake with its salty water in the Salar de Uyuni Desert, Bolivia or the white desert in Farafra, Egypt. Check out the 10 Most Amazing Deserts in the World that we can summarize below.

The Taklamakan is the largest desert in the world located in Central Asia. The desert is 270,000 km2 in the Tarim Basin with a length of 1,000 km and a width of 400 km. In 2008, the Taklamakan Desert experienced the largest snowfall with the lowest temperature after 11 consecutive days of snowfall.

It feels amazing, but in a country that consists of about 30% of freshwater and is the largest rainforest place in the world, we can find "desert". Located in the State of Maranhão, on the north coast of Brazil, Lencois Maranhenses National Park is an area of ​​300 square kilometers (155,000 ha) of white sand dunes and blue lagoon, forming one of the most beautiful and unique places in the World. The sand dunes are more than 50 km (31 miles) creating a scene reminiscent of white bed linen when viewed from above.

Salar is one of the iconic images of Bolivia, a large salt desert in the middle of Altiplano. This is a vast, almost flat desert that reflects the sun in such a way as to create a mirror effect with the sky. There are several lakes in the desert with strange colors from mineral deposits in the region.

40,000 years ago, the area was part of Lake Minchin, a giant prehistoric lake. When the lake is dry, there are only two modern lakes, Lake Poopo and Lake Uru Uru, and the two main salt deserts, Salar de Coipasa greater Uyuni. Uyuni is about 25 times the size of Bonneville Salt Flats in the United States. It is estimated to contain 10 billion tons of salt.

The main attraction of Farafra is the White Desert (known as 'Sahara el Beyda,' with the word 'Sahara' which means desert). The White Sand Desert, Egypt is located 45 km (30 miles) north of Farafra. The desert has a white, cream color and has a large limestone formation that has been created as a result of a sandstorm.

The Atacama Desert occupies the largest number of Chilean territory located north of the 29th parallel. The area located on the coast between Arica and Antofagasta appears in the Guinness Book of World Records as the driest place in the world. However, to the south of the Tropic of Capricorn, the desert becomes more friendly to living things.

The coastal mist, "Camanchacas", in the south is more numerous than Antofagasta and carries the moisture needed for the maintenance of coastal landscape vegetation. Many plants survive mainly because of "Camanchaca", and hard savings in water, in the normal dry season, which causes them to delay important functions such as growth, to support survival and reproduction.

Namib Desert is located in South Africa. which is less extensive than the Sahara but very impressive. This is part of the Namib-Naukluft National Park with neighboring Angola. The Sossusvlei sand is the highest in the world, some towering as high as 300 m and if you are lucky enough, you can stumble in the Namib desert is the only desert in the world that has elephants. Apparently, the oldest desert in the world, many types of plants and animals can only be found here.

Namib has fascinated geologists for years but is still very little understood to this day. Offshore, strong southern winds with fog and strong currents cause sailors to lose their way; the north coast has been named 'Skeleton Coast' because of the number of shipwrecks found there, some of which can be found as much as 50 m inland, as the desert slowly takes over the ocean as it moves west.

Australia is home to four large deserts, which are popularized by Mad Max, the Sturt Stoney Desert, the Tanami Desert, the Great Victoria Desert, and the Simpson Desert, also known as 'The Big Red' because of the existence of red dunes. The Simpson Desert is an erg that contains the longest parallel sand dunes in the world. This north-south oriented hill is static, held in position by vegetation. They vary at a height of 3 meters in the west around 30 meters on the east side. The most famous dune, Nappanerica, or, more popular, Big Red (named by the Simpson Desert by traveler Dennis Bartell).

Located 100 km northeast of the White desert, the Black Desert is a volcanic region shaped with large amounts of small black stone. The rocks lay on the orange-brown ground, so it wasn't quite as black as many people might hope for. Especially after visiting the white desert, which has a truly white formation, many people will imagine a dramatic desert like this. Climbing one of the many soft peaks, the view from above is truly beautiful.

Antarctica is an extreme land. It is not inhabited all year by humans because it is too cold. In 1983 scientists recorded extreme cold temperatures as low as -129 Fahrenheit. This is also the wettest place on Earth, but at the same time dry. The reason it is "wet" is not due to rainfall; since Antarctica is covered with 98% ice, it's technically very wet. But because it's also the coldest place in the world, very little rainfall - less than 2 inches per year. That makes the Antarctic Desert. Brutal ice desert cold with large trenches filled even more. 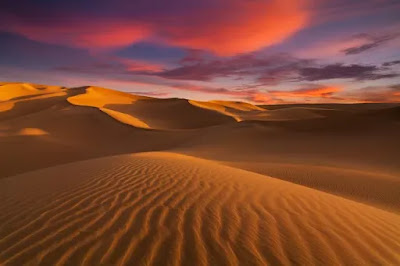 The Sahara, measuring 8.6 million km², is the largest desert in the world, which covers much of North Africa. Around 4 million people live there. The maximum length is 4,800 km, runs from west to east, and up to 1,200 km from north to south. The Sahara covers most of Mauritania, Western Sahara, Algeria, Libya, Egypt, Sudan, Chad, Niger, and Mali, to Morocco and Tunisia.

The Sahara Desert is very dry but there is annual rainfall in most areas, even though it is only a few dozen millimeters.