The Wonders of the World in the Northern Edge of Russia

However, did you know that Russia also has an alienated wonder of the world? At the northern end of the Ural mountains, there is a place called The Manpupuner Rock Formations (Manpupuner rock formations). 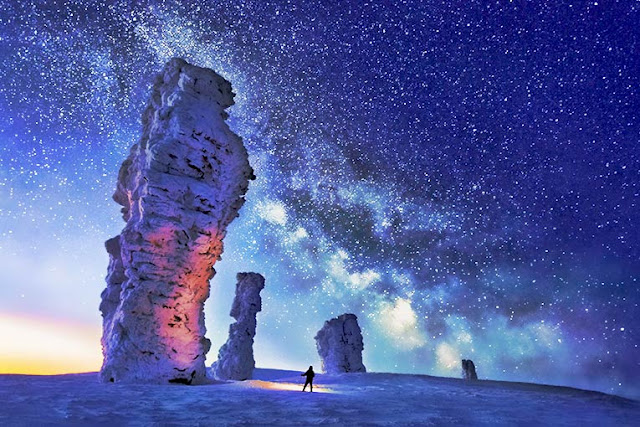 This place is in the form of grounded ground with extensive grass typical of the highlands with a set of stones that towered above the sky like 7 giant stone pillars. The origin of the creation of The Manpupuner Rock Formations has 2 different versions, the version of the legend of the surrounding community and the scientific version.


According to the version of local legend, this alienated wonder of the world comes from 7 giants who were condemned by shamans to stone. It is said that the stone pillar was once a giant "Samoyed" group that went to Siberia to destroy the nation "Mansi".

However, on the way to Siberia, the group was confronted by a white-faced shaman named Yallingner because these mountains were sacred Mansi mountains. The giant shaman condemned the Samoyed group into stone by dropping the drum and as soon as their group froze it became a stone pillar. The curse effect also hit the giant shaman who later turned to stone.


According to the scientific version, this alienated wonder of the world formed around 200 million years ago due to natural weathering. In the past, this plateau was a high mountain. However, weather changes that occur continuously such as rain, wind, heat, snow, etc. produce weathering which gradually begins to destroy the mountain, especially weak rocks.

Strong rocks such as quartzite, sericite and the like are difficult to experience weathering and survive the destruction. The remaining strong rocks form the stone pillars like towers that soar high and firmly above the surface of the Ural mountain plateau. Broadly speaking, The Manpupuner Rock Formations take the form of 6 stone pillars that are adjacent to one pillar farther away.

However, if you see the wonders of this alienated world in a short distance, you will see 6 pillars lined up around the edge of the cliff with 1 pillar that stands apart and resembles an inverted bottle with a narrow bottom but the center looks broad. These pillars can have a height up to about 30-42 meters above the ground. Each visitor has a different picture of each other about the shape of this pillar. There are visitors who mention this pillar in the form of a sheep, shaped like a horse's head, a giant man and so on.


In addition, many visitors said that while visiting this place, all the problems seemed to be floating away into the sky and disappearing. Indeed, local people believe that this beautiful place is a place to inhabit ancestral spirits since ancient times.

Many Russian native visitors who visit The Manpupuner Rock are just to take pictures among the giant pillars. However, there are also some who have intentionally come to try to climb these 7 stone pillars because there are reportedly many professional climbers who ended in failure.

Although The Manpupuner is already popular in Russia, this alienated wonder of the world is not yet well known in the eyes of the international community because of its remote location. In fact, the beauty of this site is no doubt. The panoramic blend of green grass surface, 7 giant stone pillars that rise to reach the blue sky and the green scenery of the vast savanna under the Urals is truly an amazing combination.